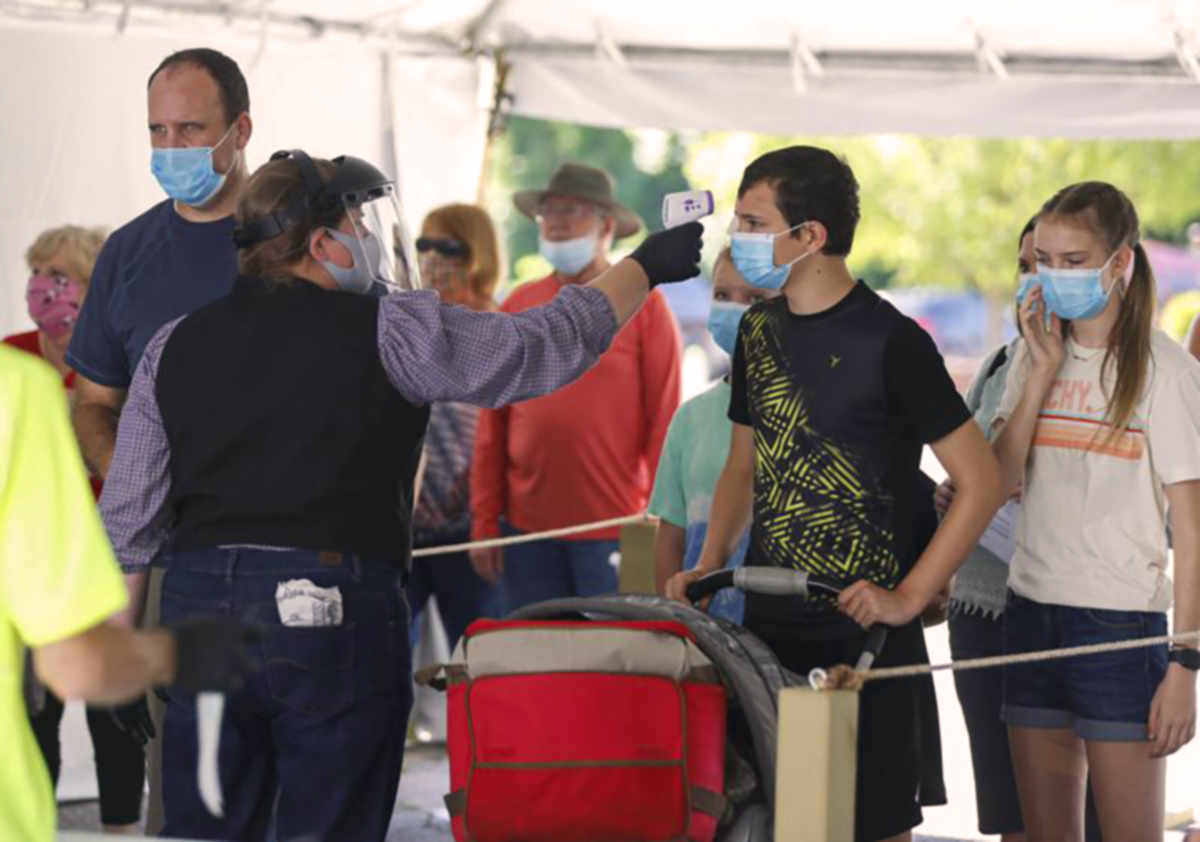 MISSION, Kan. (AP) — COVID-19 cases nearly tripled in the U.S. over two weeks amid an onslaught of vaccine misinformation that is straining hospitals, exhausting doctors and pushing clergy into the fray.

“Our staff, they are frustrated,” said Chad Neilsen, director of infection prevention at UF Health Jacksonville, a Florida hospital that is canceling elective surgeries and procedures after the number of mostly unvaccinated COVID-19 inpatients at its two campuses jumped to 134, up from a low of 16 in mid-May.

“They are tired. They are thinking this is déjà vu all over again, and there is some anger because we know that this is a largely preventable situation, and people are not taking advantage of the vaccine.”

Across the U.S., the seven-day rolling average for daily new cases rose over the past two weeks to more than 37,000 on Tuesday, up from less than 13,700 on July 6, according to data from Johns Hopkins University. Health officials blame the delta variant and slowing vaccination rates. Just 56.2% of Americans have gotten at least one dose of the vaccine, according to the Centers for Disease Control and Prevention.

In Louisiana, health officials reported 5,388 new COVID-19 cases Wednesday — the third-highest daily count since the beginning of the pandemic in early 2020. Hospitalizations for the disease rose to 844 statewide, up more than 600 since mid-June. New Orleans leaders urged people to resume wearing masks indoors.

Utah reported having 295 people hospitalized due to the virus, the highest number since February. The state has averaged about 622 confirmed cases per day over the last week, about triple the infection rate at its lowest point in early June. Health data shows the surge is almost entirely connected to unvaccinated people.

“It is like seeing the car wreck before it happens,” said Dr. James Williams, a clinical associate professor of emergency medicine at Texas Tech, who has recently started treating more COVID-19 patients. “None of us want to go through this again.”

He said the patients are younger — many in their 20s, 30s and 40s — and overwhelmingly unvaccinated.

As lead pastor of one of Missouri’s largest churches, Jeremy Johnson has heard the reasons congregants don’t want the COVID-19 vaccine. He wants them to know it’s not only OK to get vaccinated, it’s what the Bible urges.

Now many churches in southwestern Missouri, like Johnson’s Assembly of God-affiliated North Point Church, are hosting vaccination clinics. Meanwhile, about 200 church leaders have signed onto a statement urging Christians to get vaccinated, and on Wednesday announced a follow-up public service campaign.

Opposition to vaccination is especially strong among white evangelical Protestants, who make up more than one-third of Missouri’s residents, according to a 2019 report by the Pew Research Center.

“We found that the faith community is very influential, very trusted, and to me that is one of the answers as to how you get your vaccination rates up,” said Ken McClure, mayor of Springfield.

The two hospitals in his city are teeming with patients, reaching record and near-record pandemic highs. Steve Edwards, who is the CEO of CoxHealth in Springfield, tweeted that the hospital has brought in 175 traveling nurses and has 46 more scheduled to arrive by Monday.

“Grateful for the help,” wrote Edwards, who previously tweeted that anyone spreading misinformation about the vaccine should “shut up.”

Jacob Burmood, a 40-year-old Kansas City, Missouri, artist, said his mother has been promoting vaccine conspiracy theories even though her husband — Burmood’s stepfather — is hospitalized on a ventilator in Springfield.

“It is really, really sad, and it is really frustrating,” he said.

Burmood recalled how his mother had recently fallen ill and “was trying to tell me that vaccinated people got her sick, and it wasn’t even COVID. I just shut her down. I said, ‘Mom, I can’t talk to you about conspiracy theories right now.’ … You need to go to a hospital. You are going to die.”

His mother, who is in her 70s, has since recovered.

In New York City, workers in city-run hospitals and health clinics will be required to get vaccinated or get tested weekly as officials battle a rise in COVID-19 cases, Mayor Bill de Blasio said Wednesday.

De Blasio’s order will not apply to teachers, police officers and other city employees, but it’s part of the city’s intense focus on vaccinations amid an increase in delta variant infections.

The number of vaccine doses being given out daily in the city has dropped to less than 18,000, down from a peak of more than 100,000 in early April. About 65% of all adults are fully vaccinated, compared with about 60% of public hospital system staffers, said system leader Dr. Mitchell Katz.

Meanwhile, caseloads have been rising in the city for weeks, and health officials say the variant makes up about 7 in 10 cases they sequence.

“We have got to deal with it aggressively. And in the end, there is also a thing called personal responsibility,” de Blasio said, urging inoculated people to raise the issue with unvaccinated relatives and “get up in their face.”

Back in Louisiana, New Orleans officials issued the new guidance on indoor masks, hoping to avoid the kind of virus-related shutdowns that devastated the city’s tourism economy in 2020. Mayor LaToya Cantrell stopped short of requiring masks. She said the advisory “puts the responsibility on individuals themselves.”

The announcement came as the city’s seven-day average of new cases rose to 117, the highest level since early February. It had fallen as low as eight in mid-June.

Shop Now!
Save $4 plus FREE Shipping! Use Coupon Code XMAS2022
Get a FREE* 2oz sample!
*$4.99 Shipping, Continental United States Only
Get a Free Sample!
Sky Rocket Your Agency Income
Get Our Free Guide to